Looking for cool data to visualize for my Google I/O talk (High Performance KML for Google Earth and Maps), I found a few datasets from the US Census and American Community Survey that were pretty interested.

(Download this KML at the bottom of the page... read the warning ;P)

Most of this data was pretty messy, in a number of different formats (Excel, csv, raw text) and required a lot of scrubbing. I used Google Refine, Excel and Open Office Calc and good ol' Notepad++ to massage this data into a usable format (CSV).

I then found state and county polygon data on Google Fusion Tables. By maintaining the FIPS codes for all the states and counties in the Census/ACS data, merging with the geometries in Fusion Tables was pretty easy. I then downloaded a master CSV file from Fusion Tables that had a row for each state/county, and columns for each of the time-series values.

Here is the Fusion Table of all the raw data I used to make the map: raw data

To generate a KML from this csv file I used the python-based pyKML library, developed by Tyler Erickson. It is based on lxml's Objectify API, and supports schema validation against the KML XSDs. I’ll try to share some code snippets once I clean it up... right now it’s a bunch of spaghetti :)

I also used the Google Charts API Wizard to dynamically generate graphs for each state/county during the animations (you must start the tour, pause or wait until the end and then click on a polygon to see the chart). This was made possible by a lot of <BalloonStyle> + <ExtendedData> hackery (see this tutorial).

The final product is almost 650K lines of KML including 200K+ polygon vertices and point coordinates!

Ultimately, we need to add a feature to KML that allows you to associate altitudes with timestamps, like the way <gx:Track> works. But in the mean time, this will do :) 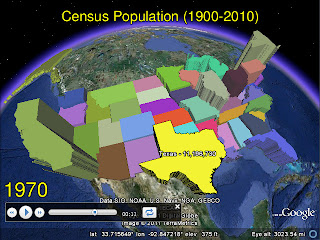 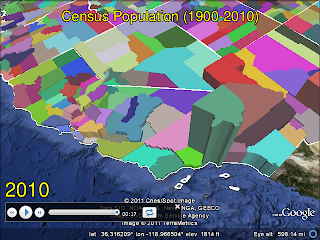 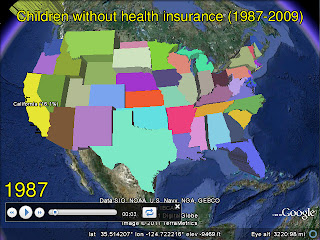 Percent of children lacking health care in 1987 by State 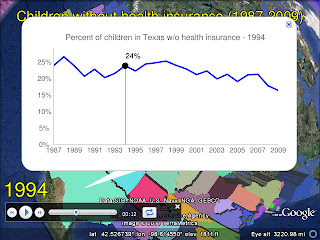 Chart API for children without health insurance in 1994 in Texas 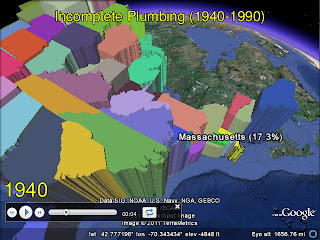 Download the KML
Warning: This is a massive KML (3MB compressed, 33MB uncompressed). The "Population (1900-2010) (County)" Tour is particularly cumbersome for laptops/older computers, because there are 3000+ animated county polygons. Click on the tour in the left hand panel to view the data.

Here are some of the KML tags I used to make this:

Posted by the KMLchemist at 1:36 PM